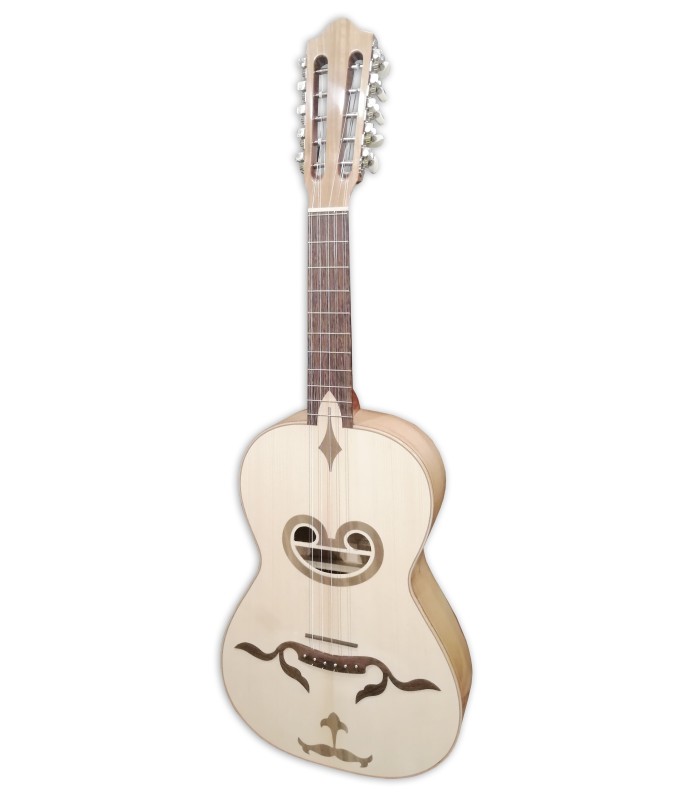 Artimúsica's viola braguesa VA21C has a spruce top, ray soundhole and standard tuning machines. The viola braguesa is a cordophone typical of the Minho region in Portugal. It is played 'rasgueado', with the fingers running all the strings. It has 5 double strings orders, with the two highest orders being tuned in unison and the three lower orders being tuned in octaves.

he Artimúsica VA21C viola braguesa has all the original features of this popular traditional Portuguese chordophone.

Made in Portugal by Artimúsica, the viola braguesa model VA21C is a pleasure to hear and play, perfect for lovers of traditional music and for those looking for new sounds in chordophones.

The construction process follows the manufacturing precepts of this iconic chordophone. The top is in spruce, the bottom and sides are in walnut. The panga panga fretboard sits on a mahogany neck. The decoration is simple, highlighting the mouth in the shape of a ray and the traditional floral motifs on this instrument on the easel and at the bottom of the top.

The viola braguesa is born in Minho (Portugal), more particularly in Braga, as the name implies. Since the 17th century, it has been used to play chulas, mallhões and viras, along with other chordophones such as the cavaquinho. It has a belted body, smaller than a traditional viola, and maintains many similarities and kinship with other traditional Portuguese violas and guitars, such as the viola Amarantina viola and the Lisbon and Coimbra guitars.

The viola braguesa has five doubled strings, that is, 10 strings arranged in five pairs, with the two highest pairs tuned in unison and the three lowest pairs tuned in octaves. There are several tunings for the viola braguesa, the most popular being the Mouraria Velha tuning (from treble to bass) Sol3-Mi3-Bi3-La2-Mi2, and the Moda Velha tuning (from treble to bass): A3-F#3 -Si3-Sol2-Re2.

In recent years, the viola braguesa has witnessed a renaissance, thanks to bands with more contemporary styles that have incorporated it into their sound, being present in styles ranging from pop to electronica.

Founded in September 1992, Artimúsica is one of the reference brands in the craft construction of traditional Portuguese instruments. It is a family business, continued by masters Manuel Carvalho and José Carvalho, who still follow the construction method started by their grandfather, master Joaquim José Machado. Each instrument is a true work of art, a unique piece of high quality and full of tradition.

The Artimúsica VA21C viola braguesa is a high quality instrument, perfect for musicians interested in preserving the sound of traditional Portuguese chordophones, and applying their musicality to both typical and more modern genres.