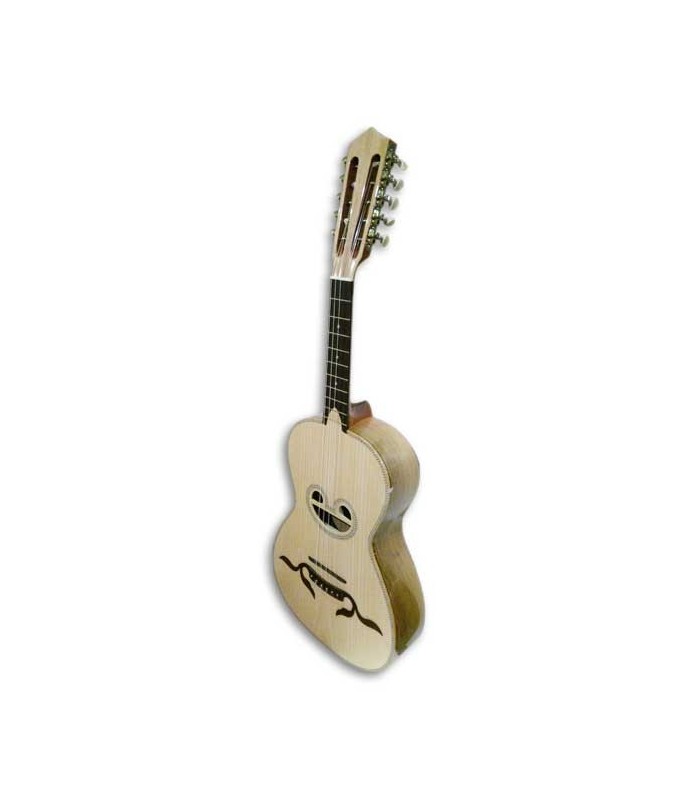 Viola braguesa with ray fish soundhole. Traditional musical instrument from Braga in the Minho region (Portugal). With 10 strings, the two pairs of treble strings are tuned the same and the three pairs of bass strings are tuned in octaves. Mostly used in popular Portuguese music.

Put your hands in the tradition with this braguesa Artimúsica 20022, with the soundhole in the form of a ray.

The Portuguese popular music is in good health, and with instruments like this is also to last. The Artimúsica 20022 is a braguesa viola that maintains the identity of the traditional instruments at the same time that it is ready to face new musical challenges.

The braguesa viola was born in the seventeenth century, in Braga, Portugal, as the name suggests. Used to liven up popular parties in conjunction with other stringed instruments such as the cavaquinho and even competing with bagpipes, the viola braguesa has witnessed a revival in recent years. Bands of more contemporary styles have played it together with electrified instruments. But anyone who was competing with a bagpipe survives everything.

Artimúsica has built a resistant instrument that respects the design and traditional techniques of manufacture, in the finishes and in the choice of materials. The top is in linden, the bottom and the sides are in walnut and the fretboard in panga panga. The decor is simple but full of traditional motifs, with a strikingly striking mouth.

With a belted body, smaller than a traditional viola, it maintains many similarities and kinships with other Portuguese traditional guitars and violas, like the amarante viola, the Portuguese guitars of Lisbon and Coimbra. It is used predominantly to play "chulas", "malhões" and "viras" but, as we have seen, it has been explored in other musical styles.

The braguesa viola has five folded strings, that is, 10 strings arranged in five pairs, with the two pairs more acute tuned in unison and the three pairs more serious tuned in octaves. There are several tunings for the braguesa viola being the most popular the "Mouraria Velha" (from the treble to the bass) tuning G3-E3-B3-A2-E2, and the "Moda Velha" tuning (from treble to bass): A3-F#3 -B3-G2-D2.

This second tuning has the particularity of the third pair of strings (B3) being the highest, which gives it a very own sound and makes it difficult to perform. It is thought to be the oldest tuning of the instrument, and the one that best adapted to the strident songs of the minhotas that accompanied the viola braguesa in the traditional celebrations.

Founded in September 1992, Artimúsica is one of the reference brands in the traditional construction of traditional Portuguese instruments. It is a family business, continued by the masters Manuel Carvalho and José Carvalho, who still follow the construction method started by their grandfather, the master Joaquim José Machado. Each instrument is a true work of art, a unique piece, high quality, and full of tradition.

Artimúsica 20022 is one of those objects of musical art that prolong the tradition with modern results, made to last in the hands and ears of those who appreciate and want to preserve the sounds of this traditional Portuguese instrument.