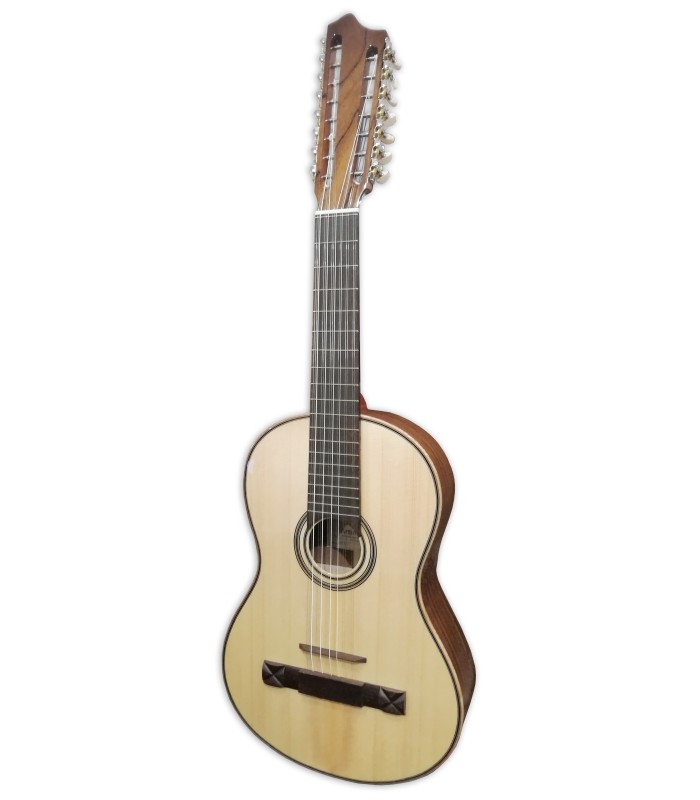 One of the typical violas of the Azores. This model is the third island variant that features a round mouth. This viola of 15 strings has 6 orders of strings, being from high to low, 3 double orders and 3 triple orders.

The viola da terra Artimúsica VA00S is the Terceira island version of this typical instrument from the Azores. Made in  Portugal.

The viola da terra Artimúsica VA00S is one of the most representative chordophones of the folklore of the Azorean islands. It is a central instrument in the archipelago's traditional festivities and as an accompaniment to popular melodies and poems.

Related to braguesa, amarantina and similar violas, taken from the mainland to the Azorean islands in the 15th century, it ended up developing in a particular way due to geographic isolation.

The top of Artimúsica VA00S is in spruce and the bottom and sides are in simple solid walnut. The neck is mahogany, with a panga panga fretboard. The decoration is simple: it has a round mouth and minimalist decor.

Founded in September 1992, Artimúsica is one of the reference brands in the craft construction of traditional Portuguese instruments. It is a family business, continued by masters Manuel Carvalho and José Carvalho, who still follow the construction method started by their grandfather, master Joaquim José Machado. Each instrument is a true work of art, a unique piece, full of tradition.

The viola da terra Artimúsica VA00S is for musicians passionate about the national musical tradition who like to play Portuguese music with instruments manufactured in Portugal.

1 other product in the same category: