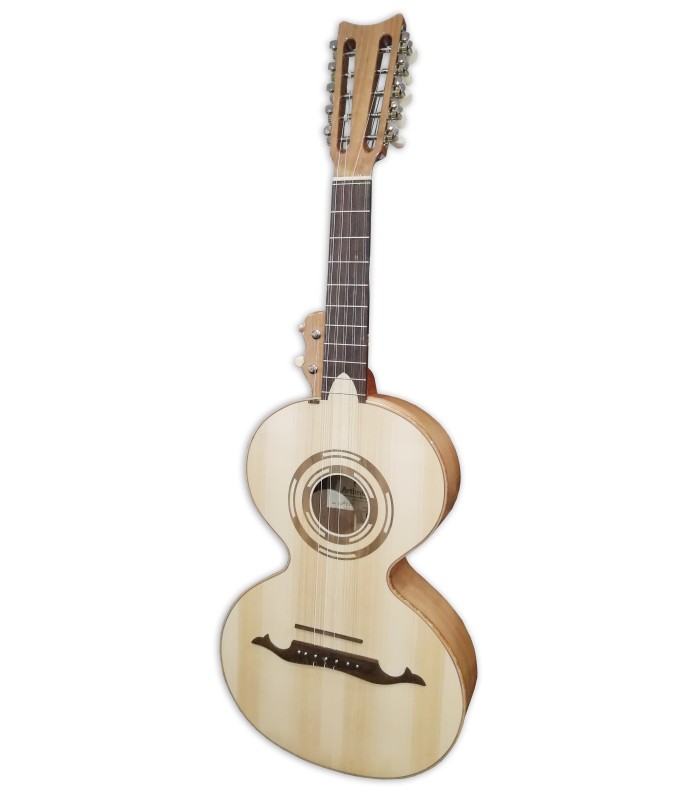 Viola beiroa or viola de Castelo Branco is a traditional Portuguese instrument from the region of Beira Baixa. It has 5 orders of double strings. This model VA50S of Artimúsica has round soundhole, top in solid spruce, back and sides in solid walnut (simple).

The tradition is still alive in the viola beiroa Artimúsica VA50S, a rare instrument with a very particular sound, linked to the roots of Portuguese popular music.

The beiroa viola is also known as Castelo Branco viola or bandurra. This instrument is a traditional 10-string Portuguese cordophone (5 doubles) typical of the Beira Baixa region, and a member of the traditional Portuguese wire guitar family.

It is an instrument with a very distinct and almost unique characteristics in Portuguese folklore.

The body is shaped like an eight in a very tight curve and the soundhole is round. The head is flat and slightly inclined with respect to the neck.

It differs from most traditional Portuguese violas because it has two simple strings tuned a fifth above and with pegs located next to the connection of the neck with the box, which play loose, giving a basic intonation that allows a more melodic performance. The pitch of the treble for the bass is D4 - B3 - G3 - D3 - A2 - D5.

Artimúsica, in the continuity of its work in traditional musical instruments, made a high quality viola beiroa. This model is built almost entirely in the materials recommended for its manufacture. The top is spruce and the back and sides are walnut, both in solid wood. The neck is in mahogany and the scale is in panga panga.

The viola beiroa was played in serenades to the newlyweds or on feast days, being an instrument that walked through the taverns with their owners or wherever anyone was willing to sing to the challenge.

Founded in September 1992, Artimúsica is one of the benchmarks in the artisanal construction of traditional Portuguese instruments. It is a family business, continued by the masters Manuel Carvalho and José Carvalho, who still follow the construction method initiated by their grandfather, master Joaquim José Machado.

With a unique sound and versatility that makes it both an accompaniment instrument and a soloist in the hands of a skilled musician, the viola beiroa Artimúsica VA50S is an opportunity to keep the musical tradition of Beira Baixa alive or to explore new paths with an instrument original and unusual.