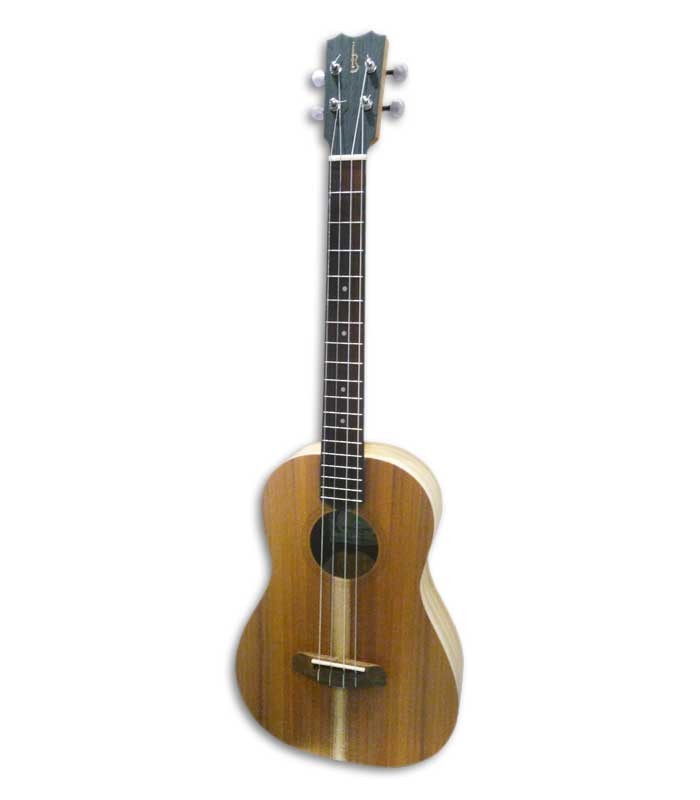 The baritone ukulele was the last of the ukuleles to be invented in the 1940s. It has scale of about 48cm. It is tuned in E-B-G-D from the highest string to the lowest, like the highest 4 strings of a classical guitar. This APC model is built with solid koa.

The APC BS Simple baritone ukulele is a spectacular looking and fantastic sounding ukulele. Made in Portugal, full of tropical style.

The APC BS Baritone Simple ukulele is manufactured by APC, who took great care in their choice of materials and applied their decades of experience in acoustic instrument manufacturing to make this instrument very special.

The body is entirely made of solid koa wood. a species of acacia native to Hawaii, which gives it an identity and sound very close to the instruments native to the American island. The fingerboard is in African black wood, very resistant and that provides a very pleasant contrast with the lighter tone of the body.

The finish is in open pore, leaving visible veins and the natural characteristics of the wood, while allowing it to expand and contract naturally, protecting it from variations in humidity and temperature and also from intensive use.

The tuning machines are open, in a simple style, and gilded. They are very stable and maintain the tuning of the strings in Nylgut, in the original string game of this model. This synthetic compound offers a more natural sound than traditional nylon strings.

Visually, the APC BS Baritone Simple ukulele is very appealing, built with great taste and attention to detail. The sound makes us feel like we're on a tropical beach on a Pacific island.

The baritone ukulele was the last of the ukulele family to be invented, more particularly in the 1940s. It is the largest of the ukuleles and is tuned in Mi-Si-Sol-Ré, from the highest to the lowest string, such as the 4 higher strings of a classical guitar, making it an excellent choice for guitarists looking to move to the ukulele.

Carried by Portuguese sailors to the American Pacific islands, the ukulele is a direct descendant of the Portuguese cavaquinho. It became a very popular instrument in the early decades of the 20th century, when Hawaiian-inspired music filled the early days of radio in the United States, and it kept company with American soldiers in World War II. It is one of the most popular instruments for being easy and fun to play, being present in several musical genres.

The BS Baritono Simples ukulele is manufactured in Portugal by APC. This company was founded in 1976 by António Pinto Carvalho, one of the most distinguished representatives of the centenary school of luthiers in Porto. Today, APC has about 45 artisans who build different types of traditional Portuguese and other chordophones. It is the largest national company in this field, producing and selling instruments to over twenty countries.

The APC BS Simple baritone ukulele is a great style and sounding ukulele for fans of this traditional borderless instrument.