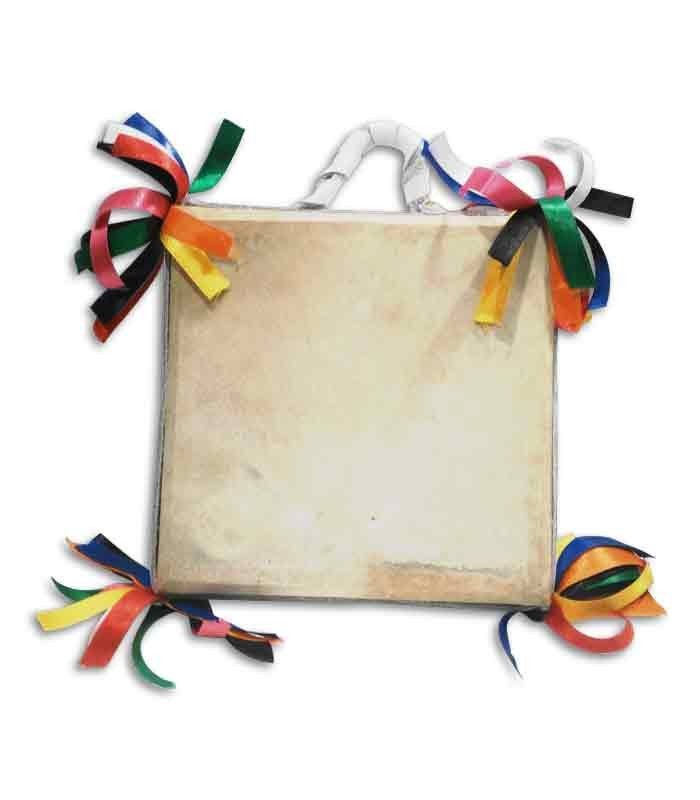 Adufe of 15cm manufactured in Portugal by MMG. The adufe is a Portuguese musical percussion instrument.  In the interior are placed seeds or small soaks in order to enrich the sound. The sides of the frame of this model measure 15 centimeters.

The adufe is one of the best known traditional Portuguese percussion instruments. The adufe MMG respects this tradition bei ng an  instrument with an excellent sound, with natural skin.

This adufe is of very small dimensions, it consists of a skin head stretched in a 15 cm wooden frame, which makes this instrument almost a miniature. Since the most usual dimension of an adufe is 45 cm (measured from the sides), a 15 cm side adufe does not produce the same deep sound when it is played.

The adufe has a rich history and unique characteristics for a percussion instrument. In addition to its particular shape, the little depth of the frame and the short distance between the skins make it sound light and light, unlike other traditional percussion instruments such as the bass drum.

Its own peculiar shape implies a percussion technique that relies more on the tapping of fingers and dry hand strokes, without the use of drumsticks. Inside, there are seeds or so soils that offer an extra richness of sand to the sound of this instrument. However, the larger timbres are adopted by some percussionists who mount them on tripod-like supports and play them with drumsticks, due to their peculiar sound.

Widely used to accompany the traditional songs of the interior of the country (Portugal) , more particularly the traditions of Beiras, this instrument was introduced by Arabs in the 11th and 12th centuries.

Usually played by women, the adufe is an instrument that contains mythology and iconography associated with the ideas of fertility and marriage, being one of the most magical and admired instruments of traditional Portuguese music.

The MMG adufe is handcrafted in Ermesinde, in the municipality of Valongo, Portugal. Since 1943, the Oficina de Artesanato César manufactures traditional percussion instruments, such as drums, timbrels, drums, reco-recos and tambourines. Today, under the direction of Manuel Moreira Gonçalves, the Oficina de Artesanato César makes traditional musical instruments and also wooden toys, which it sells to countries like Spain, Holland and Germany.

Mark the sound of traditional singing with an MMG adube.

6 other products in the same category: