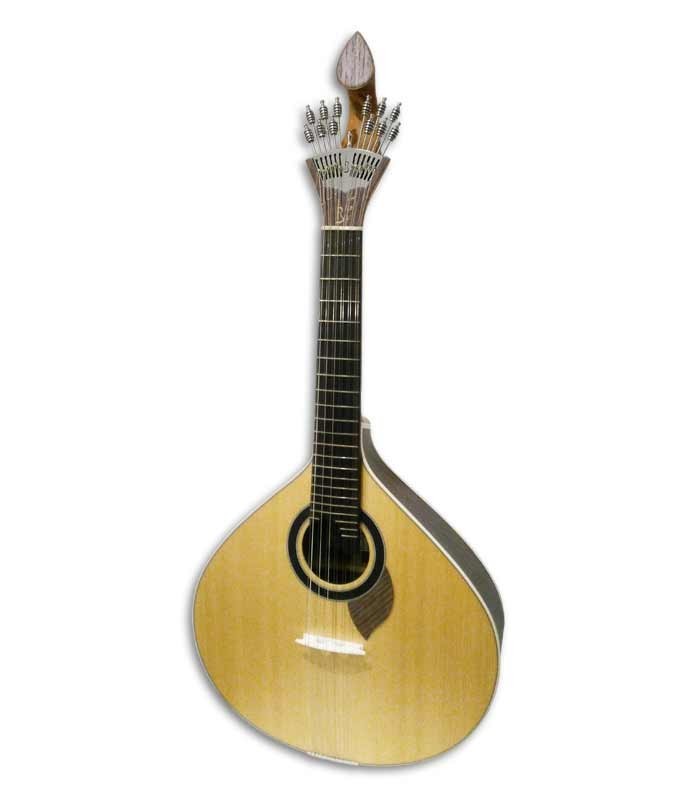 Coimbra Portuguese Guitar 310CB deluxe model. The Coimbra guitar is bigger than the Lisbon guitar and has a narrower body. Made by APC in Portugal.

The Portuguese guitar APC 310CB is a luxury model to play Coimbra fado with all your soul.

Coimbra's fado guitar has been singing the emotions of student life for over 100 years. It is played in serenades or on the steps of the Sé Velha to a crowd ready to draw their black cloaks and pass to the level of a doctor. The Portuguese guitar APC 310CB is a luxurious instrument to give another refinement and shine to those moments.

Made thinking of guitarists who want to take the next level in Coimbra's fado, the APC 310CB was made with high quality materials, longevity, and ideal acoustic properties for the typical sound of this unmistakable instrument. The top is in solid spruce, and the back and sides are in laminated rosewood. The neck is in mahogany and the fingerboard is in black African wood.

At the top of the neck, the APC 310CB features the traditional teardrop-shaped volute that identifies Coimbra fado guitars. The fan tuners are a luxury range, made of durable metal and precisely tuned in any situation, from outdoor performances to protocol sessions in the rectory.

A luxury instrument receives greater attention to detail, from the nail protection on the top to the placement of the frets on the neck, to the spruce inlaid binding. The decor is simple, but the Portuguese guitar APC 310CB exudes quality at first glance and at the first chord.

The APC 310CB is entirely manufactured in Portugal by APC, one of the most prestigious brands of traditional Portuguese and acoustic instruments in our country.

APC is the largest national company in the field, with artisans who give authenticity and a personal touch to each instrument, manufactured with the most advanced construction technology, for greater precision and rigor. Founded in 1976 by António Pinto Carvalho, APC proudly promotes the Portuguese cultural tradition by building cordophones of impeccable quality.

The Coimbra APC 310CB fado guitar has a high final average, due to the notes of the musicians who play it. Pass with honor and distinction in student fado with the Portuguese guitar APC 310CB.

27 other products in the same category: