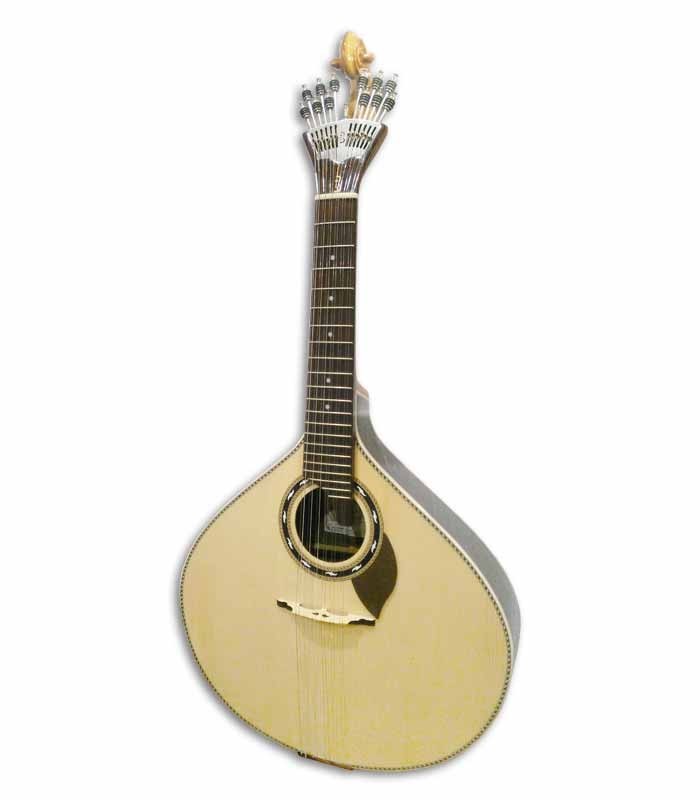 Portuguese or Fado guitar Lisbon model made in Portugal. Deluxe instrument with solid spruce top, rosewood back and sides. Made by APC.

The Portuguese guitar will have originated in an instrument called European Renaissance cistre. There are still hundreds of copies of this well preserved instrument scattered in various museums throughout Europe.

The first cistres with slight changes in size of the resonance box, neck, string material and others date back to the beginning of the 18th century, being also an instrument widely used by the bourgeoisie to play music more to their liking (suites, minuets) and, in given time, in some regions also used by the popular strata. Less documentation is available at this time.

The cistre will, in turn, be the most probable ancestor of the medieval cítola, of which there are several images, sculptures and reports in chronicles of the time and a single specimen in a museum in England that dates back to the thirteenth century.

This APC 310LS fado guitar is a model from Lisbon. Tuning B-A-E-B-A-D, from treble for bass.

The APC 310LS acoustic box uses two woods: solid spruce for the top and rosewood for the bottom and sides, molded with all the mastery of the craftsmen of the APC. The fan in which the six pairs of metal strings are placed allows the guitar to be finely tuned when playing the fado.

APC was born in 1976 by the hand of António Pinto Carvalho, to specialize in the construction of chordophones. It was at the age of 10 that his founder began to learn the art of building guitars and cavaquinhos by his grandfather's hand. Nowadays it is the largest national company in the industry, with about 50 employees, who give authenticity and a personal touch to each instrument, manufactured with the most advanced construction technology, for greater precision and rigor. Modernity and tradition are the key of this company that proudly promotes the Portuguese cultural tradition.

The musical instruments manufacturer APC also makes other instruments that are used in fado de Lisboa.

26 other products in the same category: