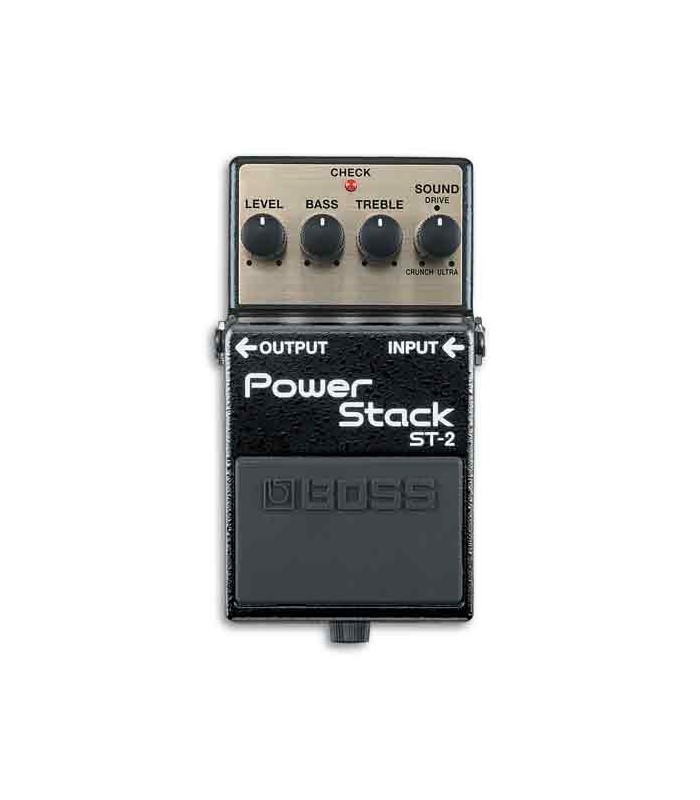 The BOSS ST-2 is one very unique distortion pedal, calling on BOSS’ years of amp modeling research to bring you real stack sounds in a compact stompbox.

Get the heat from a tube amp on a distortion pedal with the BOSS ST-2 Power Stack.

For those who are looking for that classic sound of amplifier stacks but don't have space to store them, the BOSS ST-2 is the ideal tool. This pedal was developed to produce the timbre of the tube amplification heads and their columns, stacked on visual and sound walls on the big rock stages, but its possibilities go beyond emulating an amplifier.

The sound of the BOSS ST-2 Power Stack is very natural and versatile, ranging from the crunch that provides a bit of gain to the signal, from the full magnitude of the ultra mode to aggressive distortion, not to mention the overdrive mode. It is perfect for those who like the textures of classic rock and its warm and aggressive tones.

In Crunch mode, they have access to the very characteristic distortion of one of the most legendary amplifiers ever - the Plexi 1959 - which served musicians so well in the late 60s and early 70s. The BOSS Power Stack ST-2 gives dirt and the grain that characterized the guitar sound of the time, and that served guitar legends like Jimi Hendrix, Jimmy Page or Eric Clapton so well.

In Drive mode, the gain signal is raised to higher levels, with a tone so organic that you will think your amplifier has gained muscle, but the reason is at your feet. The ST-2 produces a consistent and brilliant signal that opens the throat to your guitar and gives it the prominence it should have as a leading instrument in a rock band.

In Ultra mode they can have the sound that only a top speaker could produce. It is the way for those who like heavy, heavy distortions, in a modern and very aggressive tone.

The BOSS Power Stack ST-2 is more than a distortion pedal, as it helps to shape the sound to achieve tones that only the effect pedals cannot produce. The circuit created by BOSS reproduces the characteristics that we normally find in a tube amplifier, giving the body and tone that make the difference, and respecting the dynamics of the guitarist.

In addition to responding to the intensity of the musicians who use it, the ST-2 allows them to define the basic parameters of each mode with the Level controls, which define the intensity, Bass and Treble that give the body and voice they seek for your guitar.

BOSS has been one of the most respected brands in the construction of pedals for guitarists for over 40 years, producing some of the most iconic models in the history of music, which have shaped the sound of some of the most important artists of recent decades. In addition, all its products are recognized for their high strength and durability, thanks to a solid construction, able to survive the most demanding and intense stage conditions.

The BOSS ST-2 Power Stack is a distortion pedal for guitarists looking for the real rock sound without having to have an amplifier wall.