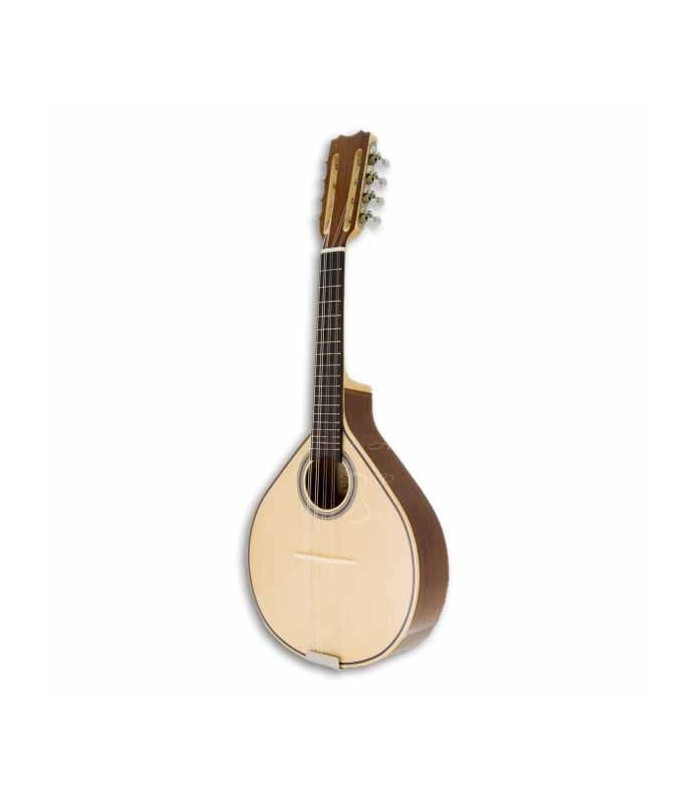 APC mandolin made in Portugal. MDL305 simple model with solid spruce top, solid mahogany back and sides. Solid woods produce richer and fuller sound that tends to better with the passing of time.

The APC MDL305 is a simple mandolin, with a brilliant sound to play together or solo in serenades. Made in Portugal.

If there is a romantic instrument, it is the mandolin. Perfect for melodies and trills, the mandolin is played in groups of cordophones such as tunas or solo under the girls' windows. The APC MDL305 follows the tradition of the Portuguese mandolin, being manufactured by APC, one of the largest manufacturers of traditional cordophones in Portugal.

With a solid maple top, which gives it greater resonance and a richer tone, this mandolin also has a mahogany back and sides. The neck is also in mahogany and the fingerboard is in rich and resistant African black wood, to withstand intensive use.

The decoration of the APC MDL305 is simple, with classic lines, where the light hue of the top wood dominates in contrast to the dark mahogany of the sides. The sound is present, with the clarity necessary for the treble to be more defined, in a very rich and full final result.

The mandolin is a cordophone, with strings of 4 double strings, tuned from the highest to the lowest in Mi - Lá - Ré - Sol, just like the violin. The strings of the MDL305 are tuned in a standard tuning machine system, very practical for musicians on the move.

The Portuguese version of the mandolin resulted from the evolution of the original instrument of Italian origin, which in turn descends from the lute. The mandolin appears in its modern form in the romantic period, around 1830, with the introduction of metal strings and pegs, which allowed for a more perfect tuning. The Portuguese version is distinguished from mandolins of other traditions by the pear-shaped harmonic box and almost flat bottom.

It was an instrument both popular and luxurious, traditionally played by ladies of high society, but that was transversal to all Portuguese society, falling into disuse throughout the 20th century, but being recovered by musicians who wanted to revive the Portuguese musical tradition and, particularly, as an integral part of academic tunas.

APC was founded in 1976 by António Pinto Carvalho, who descended from a century-old school of luthiers in Porto. The company has about 45 artisans who build several types of traditional Portuguese and other origins. APC is the largest national company in this field, producing and selling instruments to more than twenty countries.

The APC MDL305 is a perfect mandolin to go in tow for musical journeys full of spirit and romance, with the guarantee of a product made in Portugal.

12 other products in the same category: