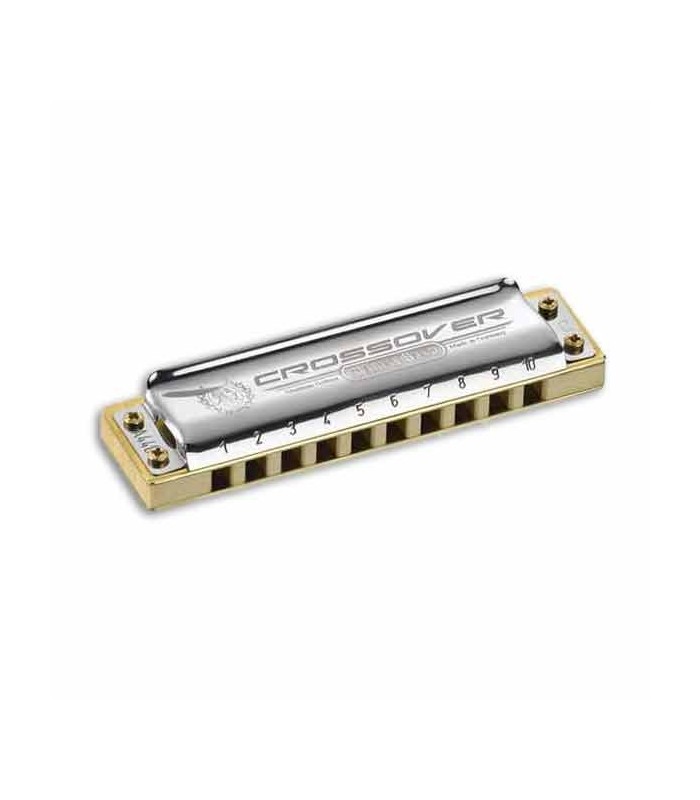 Hohner Harmonica Crossover Marine Band in A 2009 20 A

With the Crossover, Hohner expanded the Marine Band series to introduce a new, top-of-the-line professional quality instrument for the discerning player in modern blues, rock, jazz, soul or funk. Diatonic, key of A.

Hohner Marine Band Crossover is a modern harmonica for playing styles of all time. Model 2009 20 A, tuned in A.

Marine Band carries the Hohner harmonica tradition as the original blues harmonica, one of the most influential genres of popular music of the last 100 years.

With the next 100 in mind, Hohner conceived Crossover, setting a new standard in harmonicas construction. This diatonic harmonica has 10 inputs and a length of three octaves. The 20 brass reeds are arranged to allow individual execution of each of the major diatonic notes, as well as the easy execution of chords.

A-tuned, it's perfect for accompanying blues, rock or any other style that's in the E Major scale. Its powerful and very defined sound makes it an instrument with a strong presence in acoustic or even amplified sets.

This harmonica uses Richter standard tuning, which allows melody and harmony to be played, and you can play the dominant and tonic chords at the bottom of the harmonic and the notes of the scale sequentially, alternating breath and aspiration.

The Marine Band Crossover was built to last a long time. The nozzle surface is rounded with a SuperGlide lacquered finish for added comfort and durability. The cover is made of stainless steel, decorated with traditional Hohner style motifs but in a contemporary design that gives it a distinctive and modern look.

Founded in 1857 in Germany, Hohner is one of the world's leading references for musical instrument manufacturers, specializing in accordions, electromechanical keyboards and wind instruments as harmonicas. Any Hohner instrument stands for German quality, tradition and precision.

The original Marine Band defined the role of harmonicas in the blues tradition and became the reference for all the harmonics that followed. Hohner Marine Band Crossover is the next step in the evolution of this simple and versatile instrument that can interpret styles from all ages and origins, from blues to rock, from jazz to soul.

The Hohner Marine Band Crossover Harmonica is a top instrument with original sound, the bridge between tradition and the future of harmonicas.