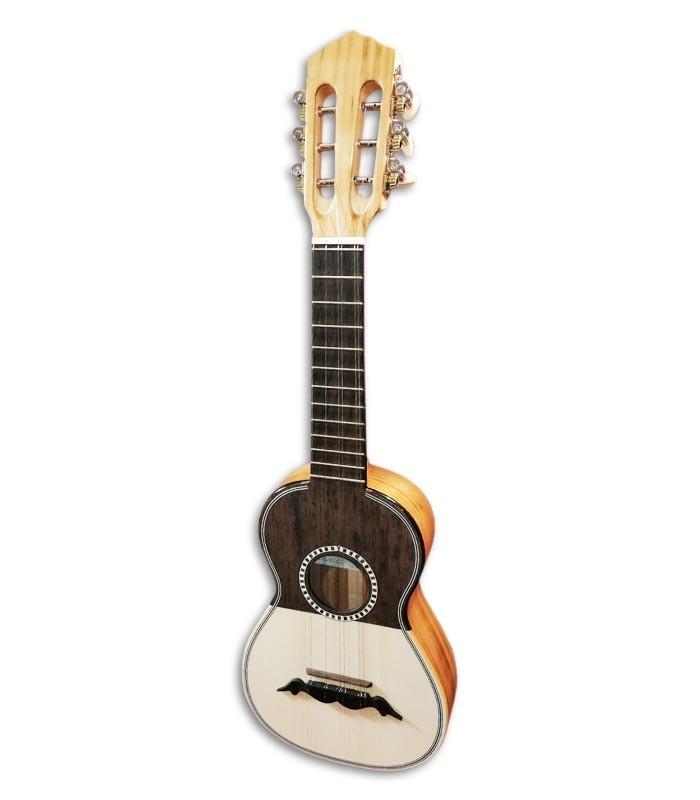 The CV20C is a 6 strings model. Half tops of solid spruce and panga-panga. The cavaquinho is a traditional Portuguese musical instrument. Handcrafted by Artimúsica.

The Artimúsica CV20C cavaquinho is a six-string variation of the traditional model, with high quality finishes and details. Made in  Portugal.

The cavaquinho is one of the most popular Portuguese cordophones. It is widely used in traditional music, from the Minho swoops to Madeira viras, but it has found space in other musical genres that benefit from its bright and very lively sound, as in the musical groupings of university students.

This version of six strings is very interesting, as it gains two more serious strings, giving it more body and scope in the harmonic functions.

Artimúsica CV20C is an example of what is best done in the construction of traditional Portuguese instruments. The top is made of spruce and panga panga, creating a contrasting effect between its two half-tops, one of the trademark images of this instrument. The round mouth and the pelmet are decorated with a discreet inlay, with a traditional motif.

The bottom and sides are made of solid walnut, cherry, mahogany or maple. The arm is in poplar, and the scale is in panga panga, giving a beautiful effect of continuity from the upper half top. The choice of woods is made with the brilliant sound of this instrument in mind, as well as its longevity, in addition to giving it a very natural and appealing look.

Because it is a predominantly harmonic instrument, it is used solo to accompany the voice, but it is also played in conjunction with traditional instruments, such as the viola, the fiddle, the reco-reco, among others, and is very popular with the tunas.

Artimúsica is one of the most illustrious brands of Portuguese popular instruments, with respect to the musical and manufacturing tradition of this typically Portuguese instrument that has spread and metamorphosed throughout the world, from Cape Verde to Brazil, from Madeira to Hawaii, always maintaining its identity and sonority in each of its variations.

Founded in September 1992, Artimúsica is one of the benchmarks in the artisanal construction of traditional Portuguese instruments. It is a family business, which follows the construction method initiated by master Joaquim José Machado, for more
100 years. Nowadays, their descendants manufacture each instrument as if it were a true work of art, making each piece unique and of high quality.

The Artimúsica cavaquinho CV20C is an instrument of great quality and musical versatility, manufactured in Portugal.