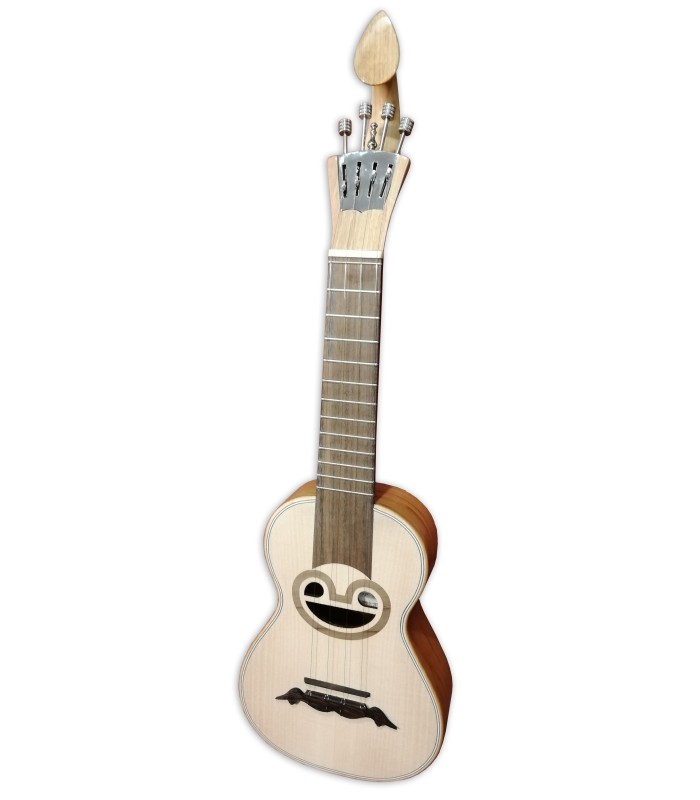 The Portuguese cavaquinho is considered the grandfather of the Hawaiian ukulele. Some key differences are the steel strings and tuning. This model has a ray fish shaped soundhole. Made in Portugal.

The Artimúsica CV11L cavaquinho brings together in a single instrument some of the most  distinctive traditional elements of Portuguese chordophones.

The Artimúsica CV11L cavaquinho is an instrument made according to construction traditions but with aesthetic details that make it very original. It's perfect for musicians who want an instrument that's as traditional as it is different.

This model uses solid linden for the top and back, the sides are in walnut, cherry, maple or mahogany from Australia. The neck is in poplar and the fingerboard is in panga panga.

The mouth of the cavaquinho Artimúsica CV11L is in lane, as in the good Minho tradition, but it combines elements seen in other instruments, from other regions. It has an oval, teardrop-shaped volute that tops the fan-shaped tuning machine, evoking Coimbra's fado guitars.

Traditionally, the cavaquinho accompanies the female voices in traditional Minho songs, but it is also used with male voices in academic tunas. This instrument of rhythm and harmony of brilliant tone can interpret different traditional styles, from viras to chulas, from malhões to "canas-verdes".

The construction method initiated by master Joaquim José Machado, over 100 years ago, is still followed by the brand's artisans. Each instrument is crafted as if it were a true work of art, making each piece unique and of high quality.

The Artimúsica CV11L cavaquinho is ideal for anyone who wants to make Portuguese tradition sound in its various forms and manifestations.