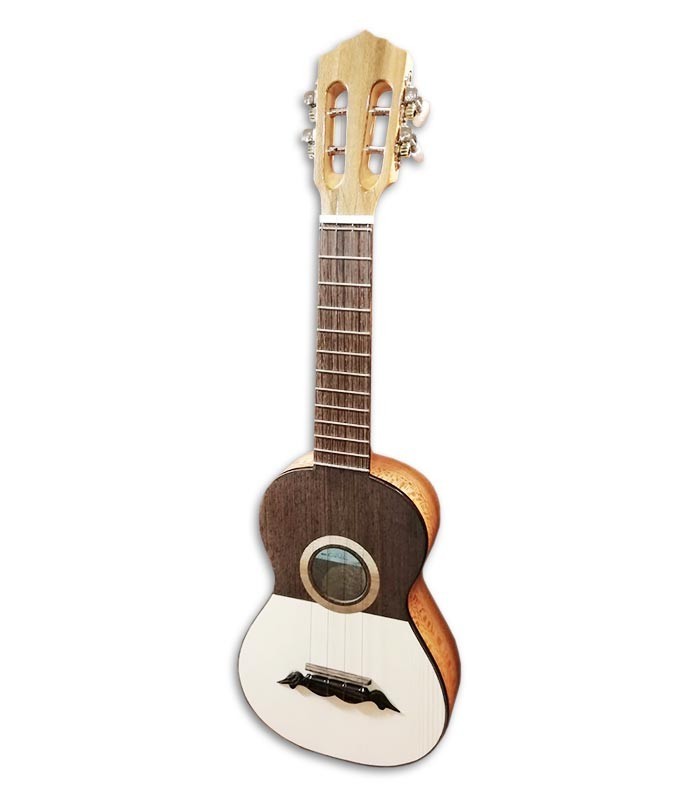 The cavaquinho Artimúsica model CV12C has the top in two different solid woods, which makes it very interesting aesthetically. It  has round mouth, carillon standard type and glossy finish.

The Artimúsica CV12C is a simple model of traditional Portuguese cavaquinho, with a sound trustworthy to tradition. Made in Portugal

One of the most popular Portuguese cordophones, the cavaquinho is used in traditional Portuguese music from all over the national territory - continental and islands - interpreting from the Minho swoops to the Madeira viras, with its bright and very lively sound.

The Artimúsica CV12C is a model that represents what is best done in the construction of traditional Portuguese instruments, by one of the most prestigious national brands of traditional cordophones: Artimúsica.

The top is in solid linden and acacia, in two different shades, creating a contrasting effect between its two half-tops, which are found just below the simple round mouth.

The bottom and sides are in solid acacia, and the neck is in poplar. The choice of woods promotes the brilliant sound of this instrument, which can be used intensively by both folk and ethnographic groups and to give joy to the sound of academic tunas.

The four strings are tuned by a set of nickel plated chimes in nickel, which allows for more intense interpretations. There are several tunings for the ukulele. The traditional tuning, from the highest to the lowest string, is in D - B - G - G.

There are also other variations, in different shades, as in G: D - B - G - D; in A: E - C# - A - E; in C: G -E - C - G; and in C: G - E - C - C. But there are many others that prove the versatility and richness of this deceptively simple instrument. These variations open up immense possibilities for integrating the cavaquinho as an accompaniment instrument or soloist in a tuna, in a set of traditional music, or in another musical style to the taste of the performer.

Artimúsica is one of the most illustrious brands of Portuguese popular instruments, with respect to the musical and manufacturing tradition of this typically Portuguese instrument that has spread and metamorphosed throughout the world, from Cape Verde to Brazil, from Madeira to Hawaii, where, under different names , this 4-string cordophone gained prominence and its own identity in each of the cultures where it was established.

Founded in September 1992, Artimúsica is one of the benchmarks in the artisanal construction of traditional Portuguese instruments. It is a family business, which follows the construction method started by master Joaquim José Machado, more than 100 years ago. Nowadays, their descendants manufacture each instrument as if it were a true work of art, making each piece unique and of high quality.

The Artimúsica CV12C cavaquinho is a very accessible model and capable of interpreting traditional music from all over the country with panache and brilliance.