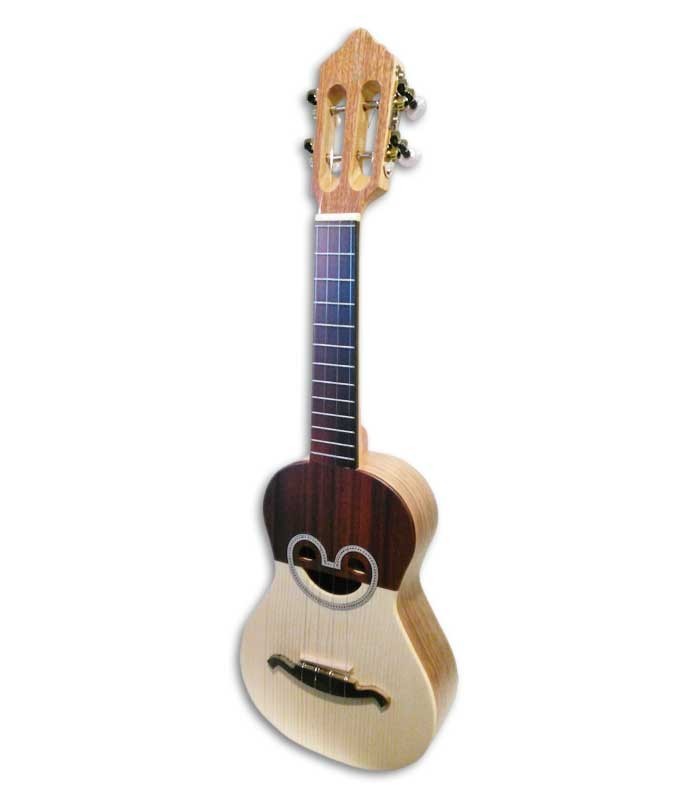 Cavaquinho made by APC. Model 103 with half tops and ray fish shaped soundhole. Folk Portuguese instrument with a very characteristic look. Constructed in Portugal by Portuguese workers.

Get started with the cavaquinho APC 103, a flashy model with the traditional ray soundhole of Minho. Manufactured by APC, one of the largest Portuguese brands of traditional instruments.

The APC 103 is yet another example of how tradition and experience meet to make a quality instrument. The APC 103 is distinguished by its characteristic appearance, with a two-tone top or, if you prefer, two half tops. Half is in light spruce wood and the other half is in black African wood, which extends along the fingerboard.

The back and sides are in laminated walnut, in contrast to the solid woods of the top, and the neck is maple. It is not only in the contrast of the woods that the aesthetics of this cavaquinho stands out. The ray mouth, in Minho style, stands out in the division between the two half tops, and the recessed pelmet is in a traditional style.

The 12-fret fingerboard is flat with the cavaquinho top, and is ready for a bright and comfortable groove, even for beginners.

The cavaquinho is an instrument widely used in traditional Portuguese music, as in the Minho "rusgas", but it has found space in other musical genres that benefit from its bright and very lively sound.

As it is a predominantly harmonic instrument, it is used solo to accompany the voice, but it is also played together with traditional instruments, such as the viola, the fiddle, the reco-reco, among others. The traditional tuning of the cavaquinho is D - B - G - G.

António Pinto Carvalho, the founder of APC, started to learn the art of building guitars and cavaquinhos, through his grandfather, when he was only 10 years old.

In 1976 he created APC, specializing in the construction of chordophones. Today it is the largest national company in the field, with around 50 employees, who give authenticity and a personal touch to each instrument, manufactured with the most advanced construction technology, for greater precision and rigor. Modernity and tradition are the key to this company that proudly promotes the Portuguese cultural tradition.

The APC 103 is an excellent example of the tradition, innovation, and experience of this prestigious brand of Portuguese folk instruments.

More than just looks, the APC 103 has a present and very characteristic sound, rich and full of tradition.