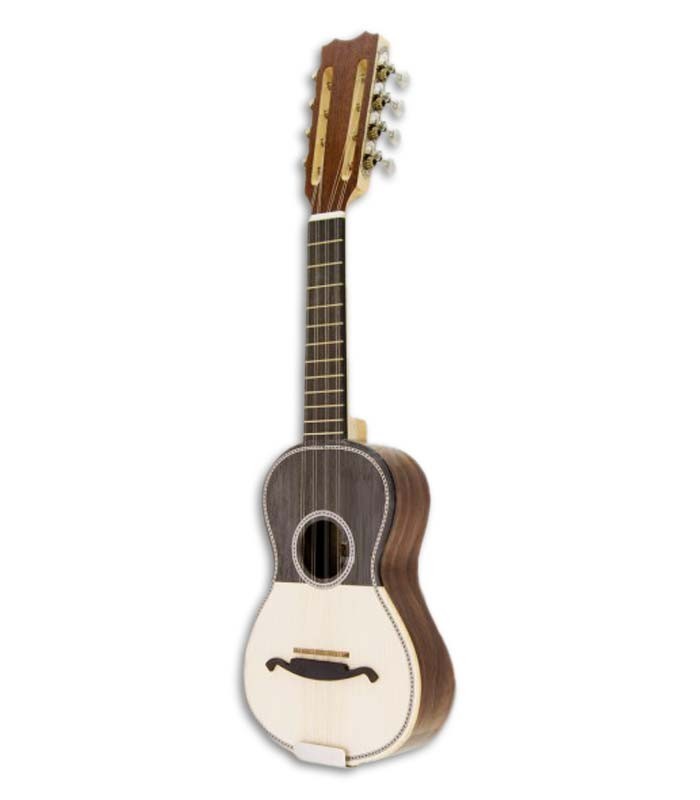 The APC model 102 cavaquinho is a model with half tops, which gives it a showy look. The woods used on the top are spruce (fir) and black African wood.

The APC 102 C8 is an eight-string cavaquinho, a variant that provides an even brighter  and fuller sound than traditional models. Made in Portugal.

APC is one of the largest Portuguese brands of traditional instruments. The APC 102 C8 is a high quality instrument at an affordable price, manufactured with modern construction techniques, following the roots of tradition.

The APC 102 C8 has several characteristics that distinguish it from most other cavaquinhos. Visually, it stands out for its two half-tops: one half in light fir wood and the other in solid black African wood. At the junction of the half-tops is a simple round mouth that unifies the image of modernity and tradition that this cavaquinho represents.

The bottom and sides are in laminated walnut, in contrast to the solid wood on the top. The neck is made of maple, with a fingerboard of 12 frets in black African wood, leveled flat to the top of the cavaquinho, for a brilliant and comfortable streak, even for those who are still starting in this instrument.

The other big difference from the APC 102 C8 is its double strings. The traditional tuning of the cavaquinho is D - B - G - G, which appears here folded for an even brighter tone and a fuller and more cheerful sound presence. The tuning machines are nickel-plated, very stable, keeping the cavaquinho in the right tone, even when played with great intensity.

This predominantly harmonic instrument is used either solo to accompany the voice or in conjunction with other traditional instruments, such as viola, fiddle, reco-reco, among others. The cavaquinho is an integral part of various styles of traditional Portuguese music, such as the Minho swoops, but has found space in other musical genres that benefit from its brilliant and very lively sound.

The APC 102 C8 cavaquinho is manufactured by APC, a Portuguese company with decades of experience in the construction of traditional instruments. António Pinto Carvalho, the founder of APC, began to learn the art of guitar and cavaquinho construction, by the hand of his grandfather, only 10 years old.

In 1976 he founded APC, specializing in the construction of cordophones. Nowadays it is the largest national company in the industry, with about 50 employees, who give authenticity and a personal touch to each instrument, manufactured with the most advanced construction technology, for greater precision and rigor. Modernity and tradition are the key to this company that proudly promotes the Portuguese cultural tradition.

The APC 102 C8 cavaquinho is a special cavaquinho for musicians looking to add an even more unique touch to their music with the sounds that define national folklore.