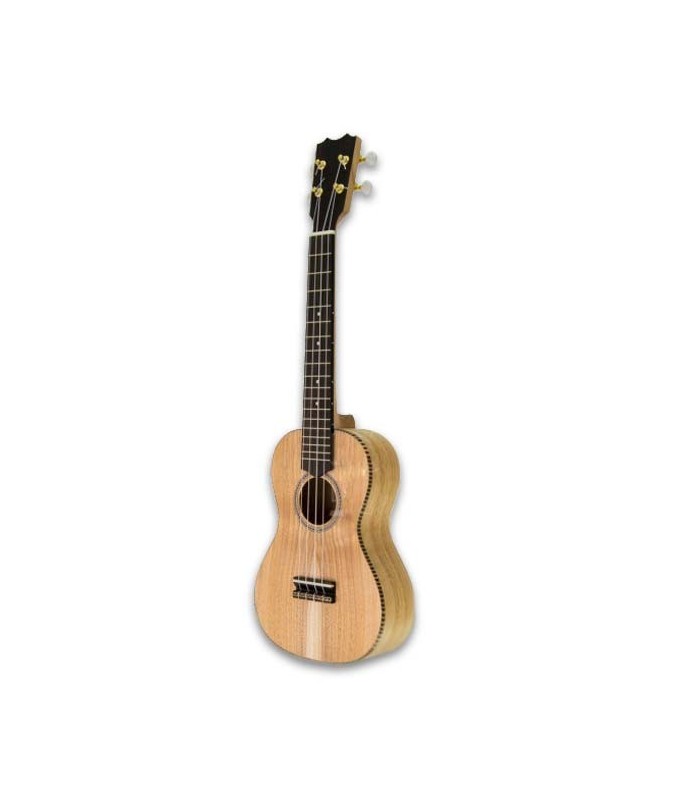 Instrument made by APC with solid koa wood. The concert ukulele has a similar sound to the soprano but with higher volume. Constructed in Portugal.

The APC CT Tradicional is a concert ukulele with a Hawaiian spirit and national tradition. Made in Portugal.

The knowledge and expertise of the artisans of APC in the construction of traditional instruments of various origins is completely revealed in this concert ukulele APC CT, an instrument with a very captivating aspect and a high quality sound.

APC CT Tradicional is completely made of solid koa, from the body to the bottom and the sides. This wood from the Hawaiian Islands gives APC CT a very natural aesthetic, with the patterns of the wood grain contrasting with the dark hue of the African black wood of the scale and the discreet pelmet in traditional inlay.

With a great frequency dynamics and a presence of stable and quality volume, the APC CT is a concert ukulele that is heard with volume and definition.

The concert ukulele was created in the 1920s, as a modification of the traditional format. The body is larger than the soprano model, which gives it a slightly more serious and full sound. It has a longer neck and a larger scale, with more frets and a greater spacing between them. It is played in the same way and even the tuning is the same: Lá4-Mi4-Dó4-Sol3.

Later on, it became a very popular instrument in the early decades of the 20th century, when Hawaiian-inspired music filled the early days of radio in the United States, and kept American soldiers company in World War II. Nowadays, it is one of the most popular instruments because it is easy to learn and very fun to play, in addition to being very portable.

Founded in 1976 by António Pinto Carvalho, who descended from a century-old school of luthiers in Porto, APC has about 45 artisans who build different types of traditional Portuguese and other origins. APC is the largest national company in this field, producing and selling instruments to more than twenty countries.

The ukulele is a perfect instrument to play in and out of doors, without having too much volume, and it is very easy to learn to play. It is an excellent offer for those who have some free time in their hands or just want to develop their musical skills in a new instrument.

The APC CT Traditional concert ukulele is the reunion between the tradition of building Portuguese instruments and the musical tradition that evolved on the other side of the world, with a sound that respects both.