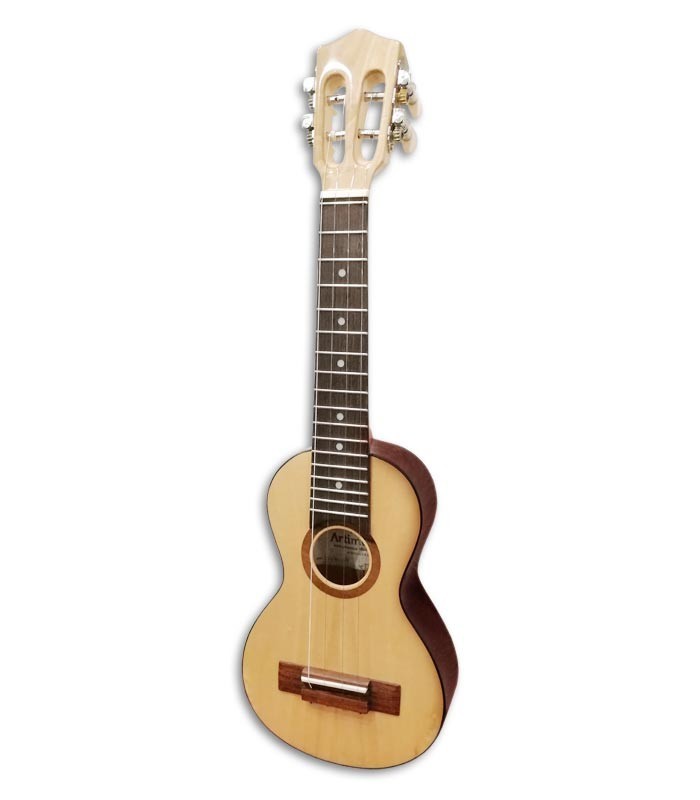 The cavaquinho braguinha (or just braguinha) is a typical chordophone from Madeira island. The Artimúsica 11170 has a solid linden top. This instrument has a glossy old age finish at the top, back and sides.

The Braguinha cavaquinho Artimúsica 11170 is a high quality model of this traditional Portuguese instrument.

The cavaquinho is a traditional Portuguese instrument that exists and persists in several regional variants. One of them is the braguinha cavaquinho, originally from the island of Madeira, which is built in the same way as the Lisbon cavaquinho, differing from the most common cavaquinho in Braga in that it has a high scale on the top instead of a flat scale.

Another significant difference is the five extra frets that the braguinha has over the common continental cavaquinho, with seventeen frets instead of twelve. The mouth is round and the head can be made of wood pegs or chimes.

The Artimúsica 11170 braguinha cavaquinho was built taking into account the specificities of this variant. The bottom and sides are in walnut and the top is in linden, which gives it that lighter shade. The neck is in poplar and the fingerboard is panga panga, a very resistant wood. It is a simple version, decorated only on the pelmet with a traditional inlay.

The finish is shiny, in stain, a method that differs from the varnish finish in impregnating the wood, presenting an "open pore" finish. When penetrating the wood, it acts as a fungicidal agent, without film formation and without peeling, giving a more natural appearance.

The braguinha cavaquinho, although typical of Madeira, keeps its origin in the name, having already been called Machete de Braga or Machetinho. It features three steel strings and a staff, tuning from high to low D - B - G - D - (bass).

Founded in September 1992, Artimúsica is one of the benchmarks in the artisanal construction of traditional Portuguese instruments. This family business follows the construction method started by master Joaquim José Machado more than 100 years ago. His grandchildren, masters Manuel Carvalho and José Carvalho, manufacture each instrument as if it were a true work of art, making each piece unique and of great value.

The Artimúsica 11170 braguinha cavaquinho is a high quality instrument, at a very affordable price and that captures the regional essence of a national instrument full of tradition and history.