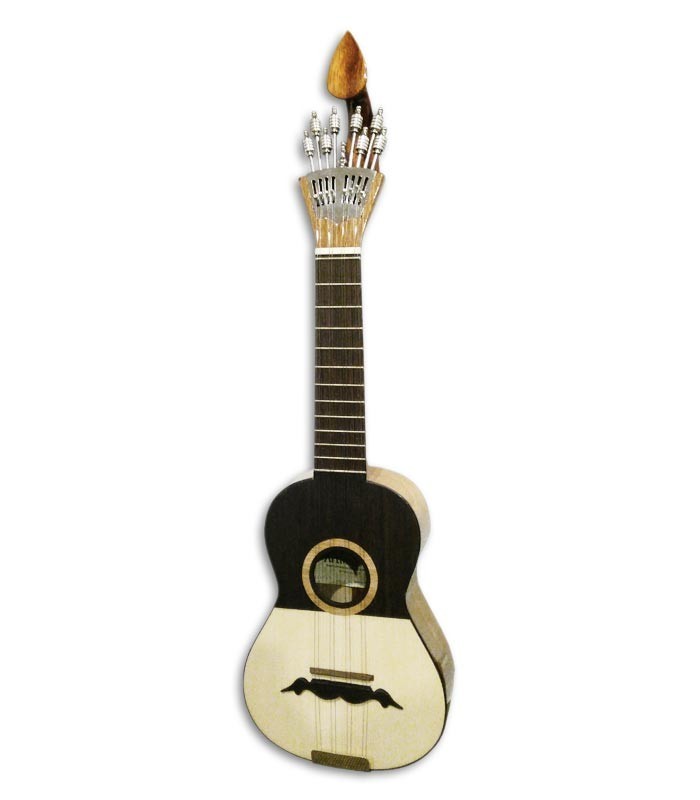 The 8-string 11114L Artimúsica Cavaquinho is a traditional Portuguese instrument made by the best traditional craftsmen. For  tunas and not only.

The 8 string cavaquinho is a portuguese chordophone also known as cavaquinho de tuna. It is a very popular variation of the four-string cavaquinho, widely used by student tunas, who benefit from the brighter sound of the eight strings and make it stand out among other instruments.

The woods chosen by Artimúsica are of high quality, and have been treated for longer life and superior sound quality. The top is in solid spruce, and the bottom and the sides are in walnut or cherry. The neck is in mahogany and the fretboard is in panga panga (Millettia laurentii), a hard wood, sturdy and aesthetically appealing wood from Mozambique.

And the Artimúsica cavaquinho 11114L is an instrument of high aesthetic quality. The top consists of two sections in different shades of wood, which contrast with the bright finish of the sides, and the tuning machines are nickel plated.

These variations open up huge possibilities to integrate the cavaquinho as an accompaniment instrument or soloist in a tuna, a traditional music ensemble, or another musical style to the performer's taste.

Founded in September 1992 Artimúsica is one of the reference brands in the artisanal construction of traditional Portuguese instruments. It is a family business that follows the construction method started by master Joaquim José Machado over 100 years ago. Their grandchildren, masters Manuel Carvalho and José Carvalho, manufacture each instrument as if it were a true work of art, making each piece unique and of high quality.

The 11114L Cavaquinho Artimúsica is an excellent instrument at an affordable price, perfect for those who like to play traditional Portuguese music or add trills and melodies to the tuna serenades, and perpetuate the national musical legacy with the manufacturing quality of one of the largest instrument companies. traditional portuguese

The traditional Portuguese instruments,
due to their handcrafted construction can present
differences from the existing photograph on the site,
especially in terms of decoration.